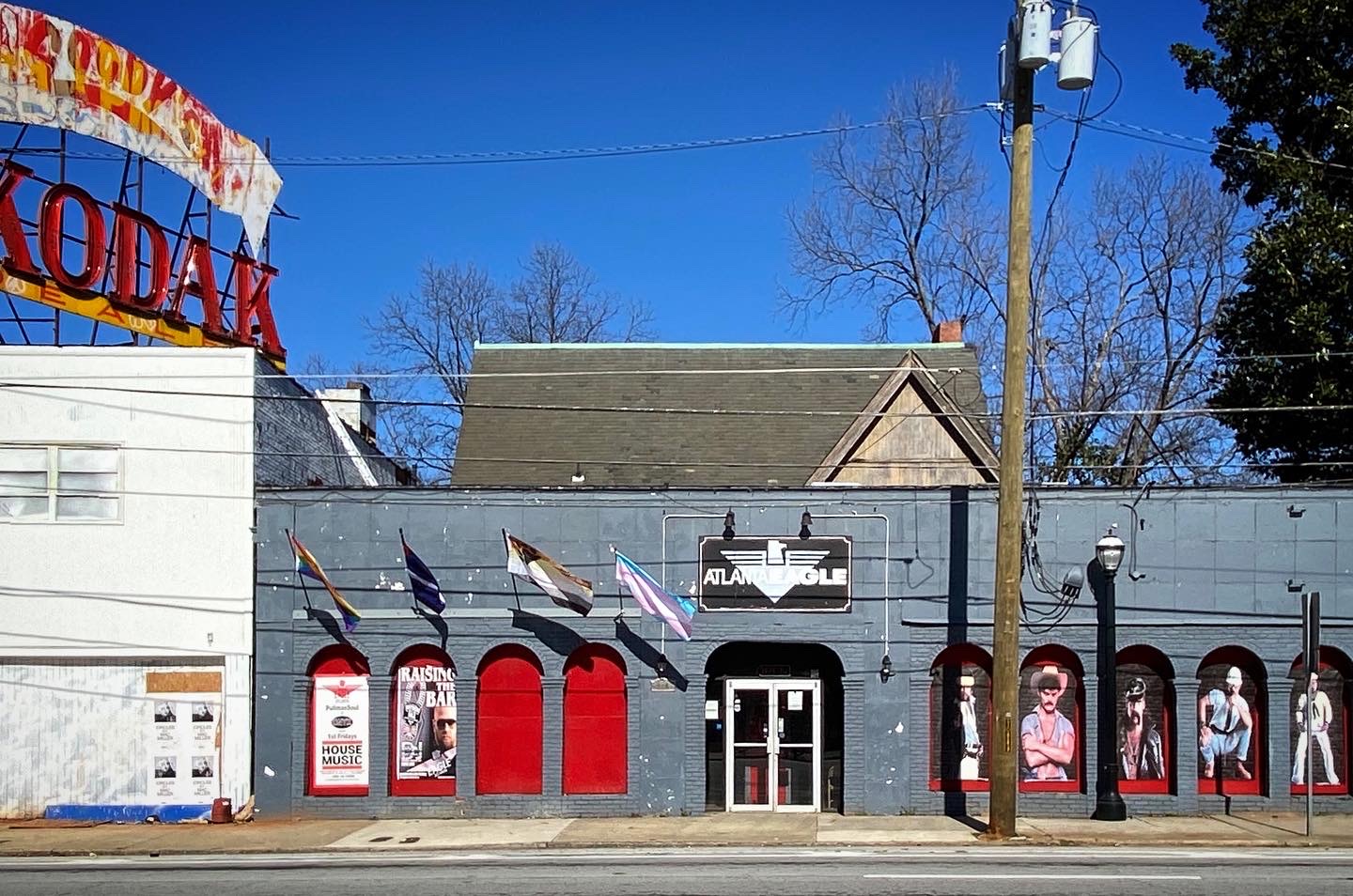 DONATE HERE TO SAVE LGBTQ ATL

The building, originally built as a single-family home in 1898, has been home to outsider communities like the LGBTQ community since 1985. Over the past 35 years, the building has developed strong LGBTQ significance during its use as Celebrity Club, Renegade’s Saloon, and The Atlanta Eagle.

Historic Atlanta’s successful advocacy on behalf of the building’s preservation has resulted in Mayor Keisha Lance Bottoms and the Department of City Planning’s Office of Design nominating the building for landmark status- a zoning designation that would protect the building from demolition and require approval for exterior changes to the building.

Early Ponce De Leon Avenue was pushed by developers Richard Peters and renowned real estate duo George and Forrest Adair to be the most exclusive, upper class corridor in Atlanta. 306 Ponce De Leon Ave was first platted in 1883 but appears to have remained undeveloped until the late 1890s. William A. Hemphill, co-founder of The Atlanta Constitution in 1868 and mayor from 1891-1893, purchased lots including 306 Ponce in 1888.

10 years later, in July 1898, Hemphill’s daughter, Lula Belle Hemphill Quinby, and her husband L. D. Teakcle Quinby, moved into their new home at today’s 306 Ponce de Leon (then 162 Ponce de Leon). The couple moved in Atlanta’s elite society, and even five years after the home was constructed, the Adairs proclaimed there was “no prettier or more modern home in the city.” The two-story home featured nine rooms, a slate roof, two porcelain tubs, a furnace, gas, electricity, and a four car garage.

However, by 1900 the Quinby family had moved out and for the next five years the home was rented to several individuals and families. Two of these tenants were H. Ed Maddox, son of an Atlanta City Councilmember, and his business partner Charles Hooks, with whom Maddox partnered to establish the Atlanta Cotton & Stock Exchange. By 1905, William L. Hancock purchased the home. The Hancock family included William L. Hancock Sr., his wife Virginia, and their two sons Kerfoot and William Hancock, Jr. Hancock constructed a new, Italian Renaissance style house to the west of 306 Ponce on the same lot in May of 1910 which would have been right on the corner of Ponce de Leon and Argonne. The new house featured yellow-brick and a tile roof, large eaves, and decorative brackets. Upon completion, the Hancocks moved into the new home and rented out 306 Ponce.

“The two commercial buildings, located adjacent to each other on the northeast corner of Argonne Avenue and Ponce De Leon Avenue, are perfect examples of Ponce’s evolution from antebellum farmland to urban commercial development. Two houses, built on historic land, changed from residential to commercial over the course of the twentieth century. The house on the corner is known to modern Atlantans as the Kodak building because of its large rooftop sign, while the house immediately to the east is known as home of the Atlanta Eagle…”

HOME TO THE ATLANTA EAGLE:

The LGBTQ association of Atlanta Eagle Building as a site of social interaction began in  January 1985. When the Nitery Club, an inclusive space managed by the band Now Explosion relocated to 306 Ponce De Leon Avenue as the Celebrity Club.

The Celebrity Club was short-lived but legendary. Bands that played at the club include the Nightporters, Easturn Stars, Medicine Suite, the BBQ Killers, Drivin’ n Cryin’,  Oh OK, the Butthole Surfers, Laurie Anderson, and Ru Paul’s band, Wee Wee Pole, in his early years as a musical artist. The space was not only a venue for local punk-rock bands, it was common that drag and political discourse was infused with the activities of the Club. When Now Explosion themselves played every show was a themed show. There were shows that addressed AIDS/HIV awareness, the Michael Hardwick incident, and even one named the “Salute to Safe Sex Show.” At these shows, the band would often pass out pamphlets to promote a liberal, pro-LGBTQ political agenda. Additionally, some of the South’s most notable drag queens made Celebrity Club their home including Miss Felecia, Chauncey, Judy Lagrange, Lahoma Van Zandt , Lady Bunny, and RuPaul.

Clare Butler of Now Explosion notes “it was at Celebrity Club where RuPaul continued to build upon and expand his performances as a dancer, lead singer of his band, Wee Wee Pole, an individual musical artist, a drag queen and a variety show host. Butler sees that “Celebrity Club offered RuPaul so many performance experiences that helped him find what was possible for his future life as a world class entertainer.” In 1985, Ru released Sex Freak, his first album as a stand alone artist. Ru is pictured in 1985 promoting his album at the Celebrity Club, where he performed occasionally.  Laurie Stevens also remembers that at the Celebrity Club, “Ru would do live music, have the back-up dancers, and was getting more glitzy and getting a show together.” Ru would continue to experiment with shows and eventually created a fake tv show at the club, foreshadowing his future success with RuPaul’s Drag Race, bringing drag culture into the homes of viewers around the world.

Celebrity Club closed in the spring of 1986 when owner Antonio DiMauro sold 306 Ponce De Leon Ave without notice. Antonio tried to move the Celebrity Club to the Frances Hotel near downtown Atlanta, but it was never the same.

Over the next months, the owners of the Texas Drilling Co., a gay bar catering to the LGBTQ community’s Levi/leather subculture, in Virginia Highland, worked to obtain liquor licenses and open Renegades Saloon & Cafe. Renegades became the first truly gay bar to occupy space at 306 Ponce in October of 1987. Six months later, the Atlanta Eagle opened in the building.

The August 28, 1988 opening of the Atlanta Eagle marked Atlanta’s place in the family of independently owned gay bars that operate under the “Eagle” name. “Eagle” bars began in New York City after the Stonewall riots 1969. That’s when Jack Modica purchased the “Eagle Open Kitchen,” a longshoreman’s pub from 1931 to 1970, and re-opened it as “The Eagle’s Nest,” a leather bar.

From that historic first opening, more “Eagle” bars emerged and became historically recognizable and reliable LGBTQ+ spaces around the world, including Baltimore, San Francisco, Tokyo, and more. These spaces are known for embracing masculinity while remaining inclusive regardless of gender, race, and age. “Eagle” bars feature black interiors in tradition with the painting of the interiors the first “Eagle”. The interior of The Atlanta Eagle is black.

The Atlanta Eagle quickly gained popularity. It soon expanded into the entire building at 306 Ponce and attracted customers from niche bars such as Texas Drilling Co. and the nearby Mrs. P’s as those spaces closed.

The Atlanta Eagle continues to achieve significance performing its historically significant role in the LGBTQ community by serving as a site of social interaction in a post-stonewall era. It also serves as an institutional home for the leather subculture providing space for organizational events and classes.

The Atlanta Eagle was raided by the R.E.D D.O.G Unit of the Atlanta Police Department on Sept. 10, 2009. A federal lawsuit was filed against the City of Atlanta by Eagle staff and patrons soon after. The case was ordered settled by U.S. District Court Judge Timothy C. Batten Dec. 8, 2010. Six officers were eventually fired.