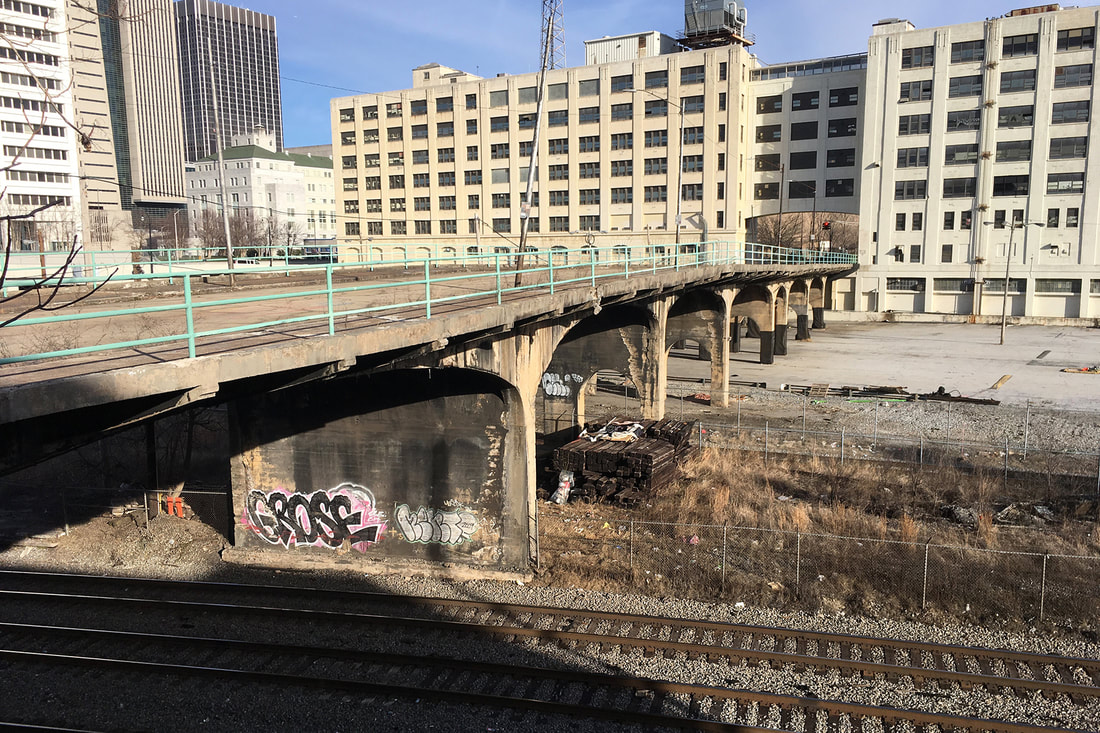 The Nelson Street viaduct traverses what was the Southern Railway Company’s in-town freight rail yard, a parking lot now, that was once filled with rows of tracks and platforms for the loading and unloading freight. The viaduct was constructed by the railroad company in 1906, the building along Spring Street through which the viaduct runs, was constructed in 1911-12.

The bridge was closed to vehicular traffic several years ago and closed even to pedestrians in early 2017. There have been attempts by a Castleberry Hill group to Save the Nelson Street Bridge, but those appear to have fallen silent. In 2017 the AJC reported that the viaduct was one of four “high priority bridges” slated for replacement with Renew Atlanta funds.

The Southern Railway Company, begun in 1894, was among the largest and strongest railroad companies in the US. Though headquartered in the Washington, DC, the Southern had a significant presence in Atlanta which was central to the system and became the company’s core of operations in the early 20th century. Norfolk & Western merged with the Southern in the early 1980s, creating Norfolk-Southern. Today most people know 99-125 Spring Street as the Norfolk-Southern building.

The Nelson Street Viaduct:
Samuel Spencer, the founding president of the Southern and a native of Columbus, Georgia, recognized Atlanta as a hub for large Southern Railway system and began planning for the construction of a large freight depot and office building along Spring Street in the very beginning of the 20th century. Nelson Street at the time was at ground level and only crossed the train tracks via a short iron bridge. In 1905, Southern demolished the old iron bridge over the tracks and began preparing the property for construction, this appears to have included excavating what had been a slight rise to Spring Street in order to have flat ground for the freight yard and construction of the buildings. An agreement with the City enabled Southern to build the viaduct to suit their purposes as long as the road would remain open to the public just like any other public street. The present Nelson Street viaduct was completed by the Southern Railway Co. in 1906.

After several delays (including the unexpected death of Samuel Spencer and a financial crisis) work on the freight depot and office building was finally begun in 1911.

99-125 Spring Street Building:
The Southern Railway building was first constructed as two buildings joined at ground level beneath the viaduct. It consisted of a six-story office building between Mitchell and Nelson Streets and a three-story freight depot south of Nelson. With the first floor at track level, freight could easily be unloaded into the building and into freight elevators which conveyed goods to the 2nd floor, street level. The Southern Railway Company continued to grow and prosper through the early 20th century. In 1928, Southern expanded 99-125 Spring Street to the full eight-stories it is today. Downtown Atlanta was less hospitable to freight traffic by then as well, and the pedestrian entrances to the building were moved from the one entrance on Mitchell Street to Spring Street. The building became almost entirely used for administration and operational offices of the company as freight services were pushed to larger freight yards around the city.

A final remnant of the freight traffic days is a covered platform which stands on the far side of the Norfolk-Southern property. It was constructed sometime in the 1940s.