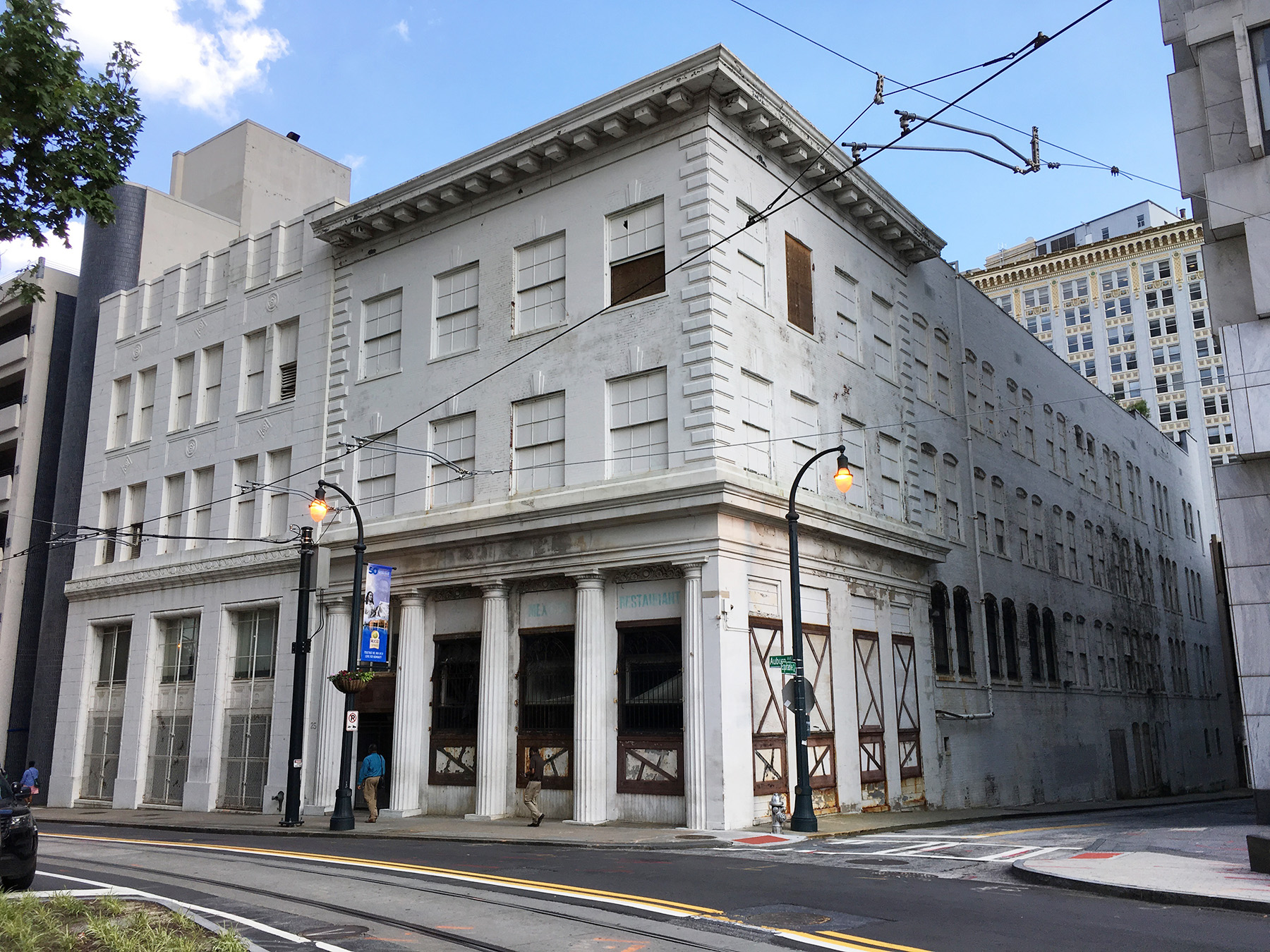 Originally built to house a telephone exchange and offices, the Southern Telephone and Telegraph Company buildings on Auburn Avenue have sat mostly vacant since the 1980s. Georgia State University took ownership of the buildings in 2006 and in 2015 announced plans to demolish them. Following public outcry to “Save the Bell”, GSU had the buildings assessed for possible reuse but did not pursue recommendations to stabilize them. The roof of the older building has yet to be repaired and continues to leak badly.

25 and 27 Auburn Avenue are commonly referred to as the “Bell Buildings” for their association with the Southern Bell Telephone Company that built them to house telephone exchanges when phone technology required manual connections between caller and receiver.

25 Auburn Avenue was constructed between 1905 and 1907 by Southern Bell Telephone and Telegraph Company to accommodate the operation of Atlanta’s second telephone exchange when call connections were made manually by operators, predominantly women workers, known as “Hello Girls”. Consequently, in addition to housing electronic switchboard work stations and supporting technical equipment, the building included a recreation room, a dining hall, and other employee support facilities. The building’s design is attributed to Harry Nelson Tyler, an in-house architect for Southern Bell. The exchange housed at 25 Auburn Avenue was given the exchange name of “Ivy”. Archival information indicates that 25 Auburn was designed structurally to carry up to seven stories. However, only four stories were constructed.

Between 1920 and 1922, Southern Bell built 27 Auburn Avenue to house the 8th exchange in the city, naming this new exchange “Walnut”. 27 Auburn was designed by noted architect P. Thornton Marye, architect of the Fox Theater, among many other Atlanta landmarks. 27 Auburn is linked to 25 Auburn by removing the south wall and a portion of the west wall of 25 Auburn Avenue, as well as an original stair tower. As with 25 Auburn, records indicate that 27 Auburn was designed to support up to seven stories, though only four were built.

Beginning in 1929, Southern Bell began building a new exchange and headquarters at 51 Ivy Street. The new and larger building at 51 Ivy Street and the pace of technological change rendered the smaller exchanges, including the ones supported at the Auburn Avenue site, inefficient and outmoded. Therefore, the use of 25-27 Auburn Avenue as a manually staffed switching exchange was discontinued. However, the Auburn buildings continued to house switching equipment and telephone operations until 1968, when the buildings were sold to the Trust Company of Georgia. Under Trust Company ownership Southern Bell continued to lease the buildings, mainly for storage, until 1983. Records indicate that the Trust Company of Georgia originally planned to demolish the buildings but ultimately ended up using them for storage as well. From the early-1980s through the late-1990s, a portion of the first floor of the 25 Auburn building was adapted to house a restaurant. In 2006 the two buildings were sold to the Georgia State University Foundation and have been vacant since.